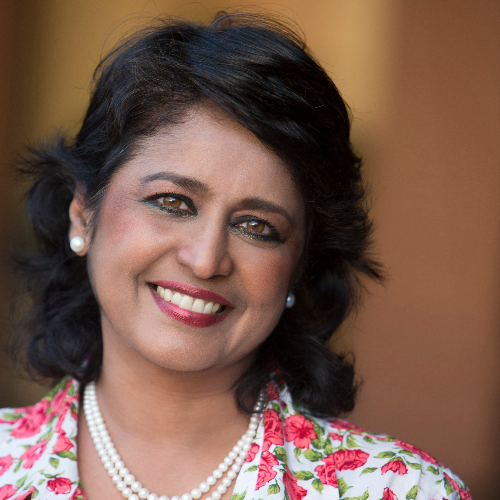 6th President of the Republic of Mauritius

Ameenah Gurib-Fakim has been the Managing Director of the Centre International de Développement Pharmaceutique (CIDP) Research and Innovation as well as Professor of Organic Chemistry with an endowed chair at the University of Mauritius. Since 2001, she has served successively as Dean of the Faculty of Science and Pro Vice Chancellor (2004- 2010). She has also worked at the Mauritius Research Council as Manager for Research (1995-1997). Ms Gurib-Fakim earned a BSc in Chemistry from the University of Surrey (1983) and a PhD from the University of Exeter, UK (1987). During her academic journey, she has participated in several consultation meetings on environmental issues organized by international organizations. Between 2011-2013, she was elected and served as Chairperson of the International Council for Scientific Union – Regional Office for Africa, and served as an Independent Director on the Board of Barclays Bank of Mauritius Ltd between (2012-2015). As a Founding Member of the Pan African Association of African Medicinal Plants, she co-authored the first ever African Herbal Pharmacopoeia. She has authored and co-edited 30 books, several book chapters and scientific articles in the field of biodiversity conservation and sustainable development. She has lectured extensively across the world; is a Member of the Editorial Boards of major journals, has served on Technical and national committees in various capacities. Elevated to the Order of the Commander of the Star and Key by the Government of Mauritius in 2008, she has been admitted to the Order of the Chevalier dans L’Ordre des Palmes Academiques by the Government of France in 2010 and is the recipient of 5 DSc (s). Elected Fellow of several academies and societies, Ms Gurib-Fakim received several international prizes including the 2007 l’Oreal-UNESCO Prize for Women in Science, the African Union Commission Award for Women in Science, 2009. On 05 June 2015, she was sworn in as the 6th President and the First Female President of the Republic of Mauritius and served in that capacity until March 2018. She was elevated to the Order of GCSK by the Government of Mauritius, and received the Legion d’Honneur from the Government of France in 2016. In 2017, she received both the lifelong achievement award of the United States Pharmacopoeia-CePat Award and the American Botanical Council Norman Farnsworth Excellence in Botanical Research Award. In 2018, she received the Order of St George at the Semperopernball, Dresden, Germany. In June 2016, she was in the Forbes List for the 100 ‘Most Powerful women in the world’ and 1st among the Top 100 Women in Africa Forbes List 2017, 2019. She is honoured as one of Foreign Policy’s 2015 Global Thinkers.