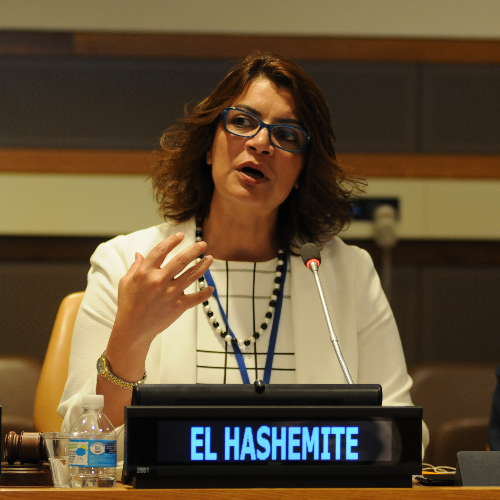 Executive Director of the Royal Academy of Science International Trust

HRH Princess Dr. Nisreen Bint Prince Mohammed Bin King Faisal (I) Bin El-Sharif Hussein El-Hashemite’s origins combine history, religion, politics and education, since she is from the Hashemite Family; the Princess Nisreen is the granddaughter of King Faisal (I) Bin El-Sharif Hussein, the first King of Iraq and founder of the Modern State of Iraq, where the Iraqi Nation with all of its diversified ethnic origins and religions for the first time, in its history became united under the King’s leadership and his commitment to democratic values, implemented through education, tolerance, mutual respect, and upholding good relations between neighboring and other international countries.

Following in the steps of her ancestors, and vowing to preserve the traditions of her family; Princess Dr. Nisreen not only dedicated herself to serving mankind, but also is an internationally recognized medical doctor and scientist and winner of awards in the fields of science, arts, literature, and humanitarian affairs:

In 2007, Princess Nisreen left her scientific career at Harvard Medical School, to which she was very
committed, to devote herself to serving Science Technology & Medicine Education and Research in the world, throughout RASIT and its programs. Currently, she is working on establishing an International Institute of Medicine and Public Health for Science and Innovation in the MENA Region. She also is working on serving the children and women of Iraq in particular and those in need of help in all aspects of their lives. At present, Princess Dr Nisreen is the Executive Director of the Royal Academy of Science International Trust (RASIT), and President of the Women in Science International League.